Founded in 1985 by Jim Leedy, with the vision of initiating a permanent and thriving art community in Kansas City; the Leedy-Voulkos Art Center’s mission is to profile world class artwork by Kansas City’s creative community of  painters, sculptors, ceramicists,  photographers, designers, printmakers, craftsmen and more. For the past 30 years, we’ve continued the founder’s legacy of sharing professional resources with developing artists to help leverage their exposure during monthly First Friday openings. We exhibit compelling shows of international, national, and regional artist, but our main focus is to  provide a venue to support students and local artists in order to retain Kansas City’s talented creatives. 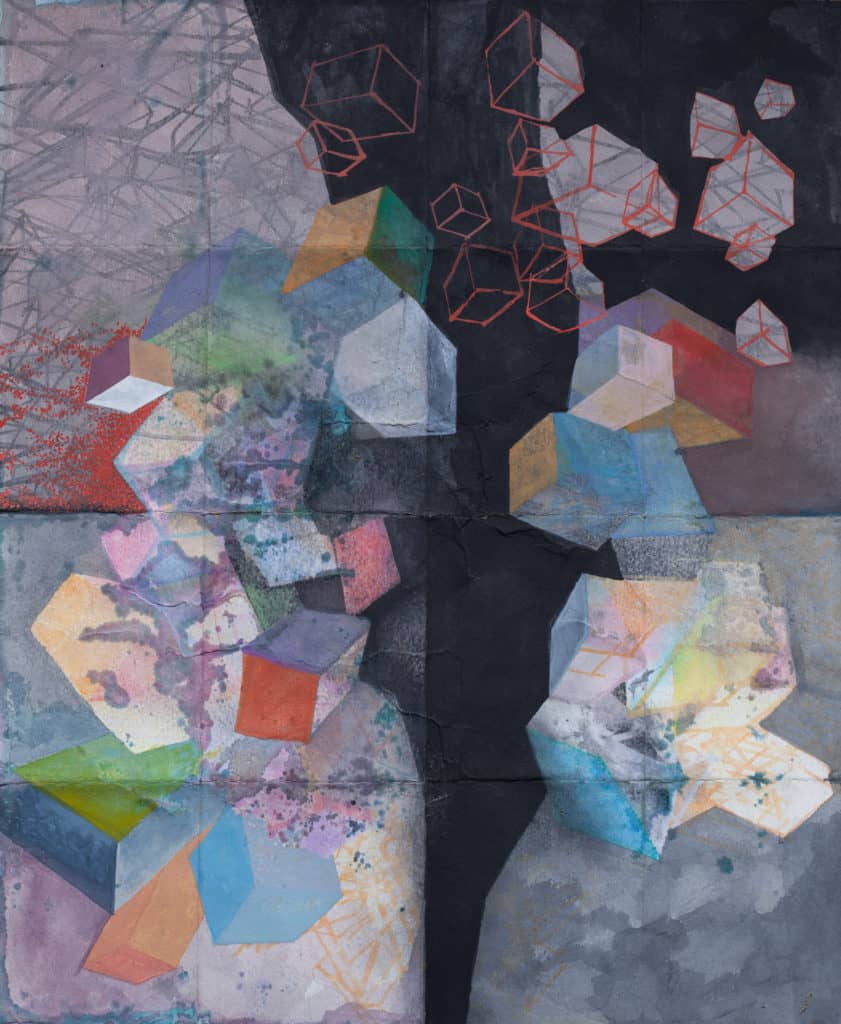 His subject matter encompasses right angles, cubes, triangles, and circles; tunnels, curves, figures, and smoke. He can painstakingly create a pluperfect painting of knives, and also abstract fields of dissolving color. Tom Gomersall’s art demands equal time from both the right and left side of his brain, and the viewer’s. The consummate aesthetic juggler, Gomersall creates scenes of visionary architecture that are as meticulously drawn as his organic, atmospheric works appear siphoned from a rainbow following a cloudburst.

If Gomersall’s architectonic drawings and paintings appeal to reason and stability, his works on paper of tube-shaped formations, twisted and wrapped around one another, suggest convoluted entrails sucked from a creature out of Dune. Geometric field patterns proffer an environment of total cohesion, while shadowy passageways disappear into nameless voids. His color ranges from riotous primaries to pastels to pitch blackness.

After more than sixty years of making art, Gomersall states: “I have no use for consistency. So I’m never concerned about the development of a style in a conventional sense. I’m working out certain mental and visual problems in an almost quasi-scientific way. Things get activated by my brain and my emotions and I just try to ride it.”

Gomersall grew up in Columbus, Ohio and received his M.A. in painting and printmaking from Ohio University. He moved to Kansas City when he was hired to teach in the Foundation Department at the Kansas City Art Institute, where he worked from 1970-80.

Gomersall has always experimented in a wide variety of media – drawing, printmaking, painting, sculpture, and ceramics. He says: “Working in Foundations was great for me and my way of working; it was all about diversity and exploration and looking for the unanswerables.”

When he did not receive tenure he left and founded his own screenprinting company. Although continually making art, he has not shown his work in more than 35 years.

“In retrospect,” he says, “this was productive and positive because it propelled me to a greater sense of who and why and what I was doing artistically.”

Widely read in everything from Tibetan Buddhism to artist biographies, Gomersall likes to quote Agnes Martin. “’When you make art, you’re turning your back on the world,’ Martin wrote, and in some ways my experience is similar to hers,” Gomersall says. The English visionary poet and artist William Blake (1757-1827) is another seminal figure who has had “a foggy, mysterious influence on me.”

Gomersall’s paintings and drawings may suggest either the rational or the unknowable, but his ceramic art – which he came to relatively late in his career – is comfortably grounded in the visceral. That is natural for this medium, of course, and, despite his strong cerebral impulses, Gomersall took to it like a duck to water. Along with more traditional earth-colored bowls,

Gomersall makes tiles that vibrate with extraordinary pattern and color. These are joyful, abstract artworks, and are singular among his oeuvre.

Over the years Gomersall has also depicted small, male figures that are somewhat enigmatic, even furtive. He has also created a series of tiles with black male figures on a white ground, and sculpted a number of diminutive clay heads and figures. These figures embody a searching quality, but they are also very present.

“I have something of a tedious quality of working that doesn’t necessarily translate to large scale. But at the end of the day,” Gomersall says, “I like to have something I can put on my table.”